The father of US Attorney General William Barr hired a young college dropout named Jeffrey E. Epstein to teach math at the Dalton School in the 1970s. The convicted sexual predator was 21 when the college prep school headmaster Donald Barr engaged him in the early 1970s as a physics and calculus instructor. A report said he was hired in 1973, but it appears Barr hired him in 1974, the same year that Barr would leave the school after a decade as headmaster.

Epstein, in jail awaiting trial on federal sex trafficking charges, died Saturday while in custody of the federal Bureau of Prisons, which is overseen by the Department of Justice. Epstein is reported to have hanged himself, but the New York City Medical Examiner has not yet ruled on the former billionaire’s cause and manner of death, per an email to Heavy.

It’s been widely reported that the accused pedophile had been on suicide watch but was recently taken off that close surveillance. His death is under investigation, including a report that Epstein was not checked for hours and one guard was not an corrections officer, AG Barr said Monday.

Donald Barr died in 2004 at age 82. He ran the tony Upper East Side Ivy League college prep school for 10 years before stepping down. In 1976, Epstein too would leave the school for reasons unknown. But in a recent exposé, it’s revealed that Epstein was seen as both flashy and unconventional and perhaps too interested in the teenage girls that were his pupils.

Here’s what you need to know:

1. Epstein Had Taken Classes But Ultimately Dropped Out of Two Prestigious New York Universities. Donald Barr Hired Him to Teach at the Famous Prep School

Don’t forget: Barr’s father hired Epstein at the Dalton School despite the fact that he had no teaching experience, where he made the connections that made him a rich man. Must not have been lost on Epstein that the Barrs had shaped his whole life. https://hillreporter.com/the-ties-that-bind-jeffrey-epstein-william-barr-donald-trump-34107 …

During Attorney General, William Barr’s confirmation hearing, he was mostly peppered with questions about how

Epstein was born in Brooklyn in 1953 and grew up in the Coney Island section of the borough and graduated from now-closed Lafayette High School in the Bath Beach (Gravesend) neighborhood in Brooklyn. Epstein took classes at the Cooper Union for the Advancement of Science and Art (known colloquially as Cooper Union) and the New York University. But he never earned a degree.

It’s not clear how and when they met, but Barr hired the 21-year-old Epstein to teach mathematics and science courses at the Upper East Side school and he began work there in the fall of 1974 without a college degree. A report in the Times had an alumni say that Barr was less interested in credentials than in know-how.

While Mr. Barr was strict on the school culture, he made it a point to hire teachers from unconventional backgrounds, recalled Susan Semel, a social studies teacher at Dalton from the 1960s to 1980s who later wrote a book on the history of the school.

“Barr didn’t care about credentials as long as you were interesting and knew your stuff,” Ms. Semel said.

Donald Barr was born in New York City to a psychologist mother and economist father in 1921. Born Jewish, he would covert to Catholicism.

Barr taught English at Columbia University, was headmaster at Dalton and the Hackley School in Tarrytown, New York. In his obituary, it was noted that Barr was a “traditionalist in academic matters, took a no-nonsense approach that rated good conduct as a virtue.”

In the Times obit, it was reported that while at Columbia, he studied mathematics and anthropology at Columbia, and after graduating in 1941, joined the Army and served with the Office of Strategic Services in Washington and Europe. After the war, he returned to Columbia to teach, earned his masters degree and then completed coursework for a Ph.D. He segued from English to math and the sciences, social and physical and wrote elementary and middle school science and math textbooks. He taught at Columbia’s School of Engineering and led a program to recruit “promising elementary and secondary science students, including girls, and enlist them for advanced training at the school to help them rise to the college level.” Barr developed the University’s Science Honors Program which would be modeled by the National Science Foundation for similar programs. 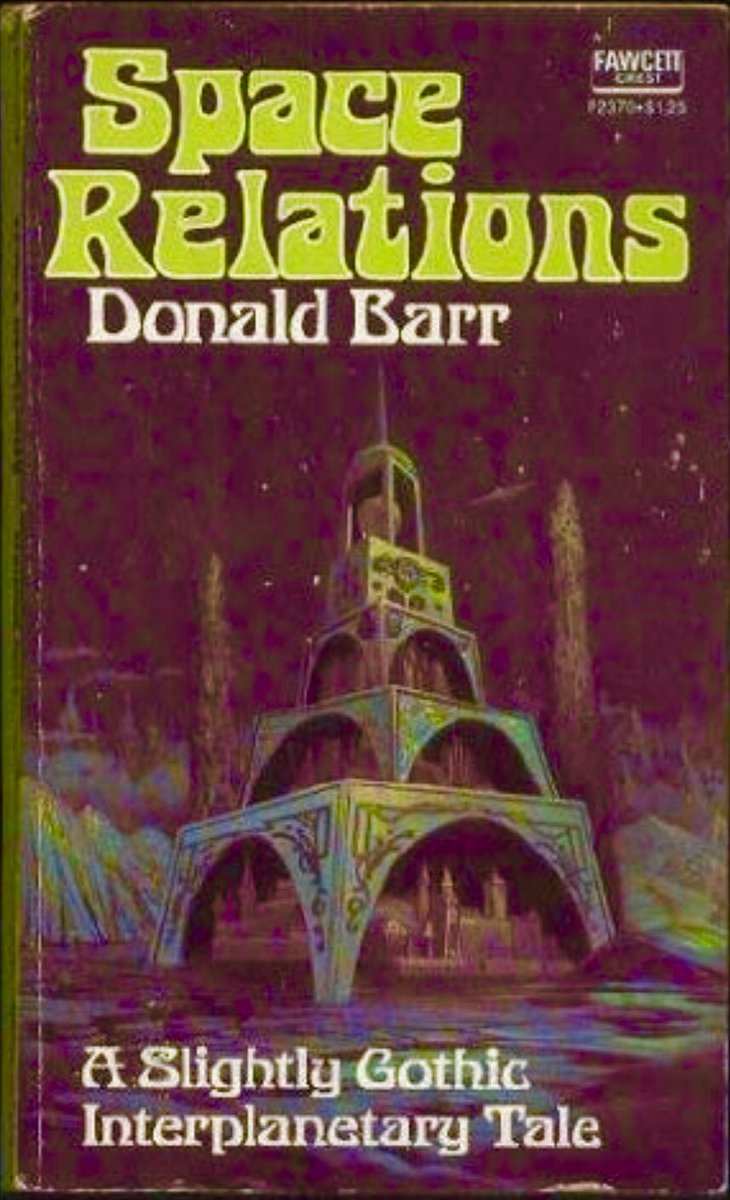 111 people are talking about this

In his 1973 science fiction book ‘Space Relations: A slightly gothic interplanetary tale,’ Barr wrote about a future where after “…galaxies are colonized, John Craig, a young space diplomat, is captured by interplanetary pirates and sold into slavery.” The blub for the book reads, that on the planet Kossar, “boredom and absolute power have driven the rulers to a special kind of madness,” and Craig is captured and sold into slavery until he’s bought by “the exquisite lady Morgan Sydney, a beautiful, sensual woman. He soon makes his way from the hellish slavery into her bed in the tower of her castle.”

An Amazon reviewer noted that Barr’s, “… exploration of slavery is neither sensitive nor telling. Despite repeatedly and officiously informing the reader that slavery is wrong at every turn (go figure), Barr creates two openly ‘superior’ characters as his leads. Craig and Morgan freely kill, torture, seduce and make sweeping political decisions on behalf of thousands of people – but this is acceptable, because they’re somehow imbued with ‘natural heroism.’ Slavery and oppression are wrong, unless you’re someone as wise and talented as Craig or Morgan, in which you’re perfectly justified in forcing decisions on other people.”

His book ‘A Planet In Arms,’ from 1981 is about “a planet in chaos,” where a man and woman “try to stop another man trying to rule their planet.”

4. US Attorney General William Barr Said he Was ‘Appalled’ to Hear of Epstein’s Death & Promised ‘To Get to the Bottom of What Happened’

AG Barr repeatedly refers to the Epstein case in past tense at the same time he assures us it will go forward. Double speak at it’s finest from the master himself. https://twitter.com/ABC/status/1160928687052562437 …

NEW: Attorney General Bill Barr: “Let me assure you that this case will continue on against anyone who was complicit with Epstein. Any co-conspirators should not rest easy.” https://abcn.ws/2ySYcAC 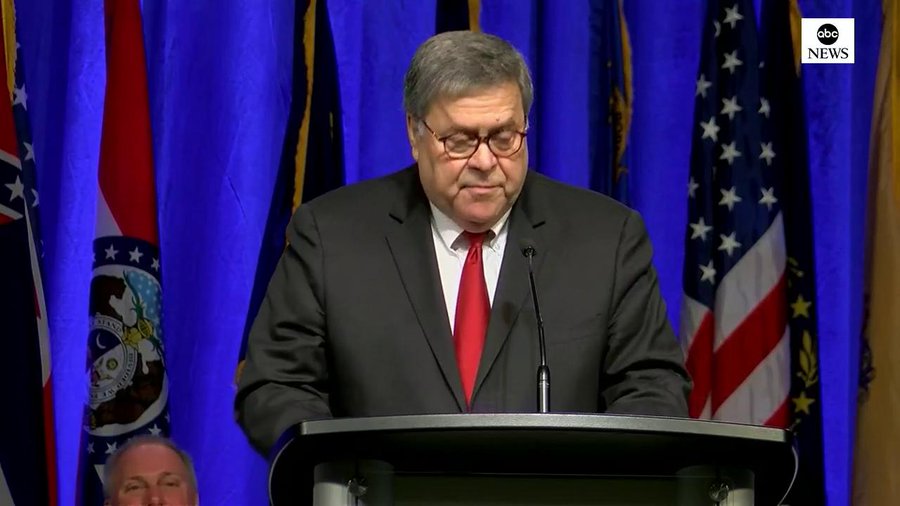 We will find out what happened to Jeffrey Epstein from AG Barr’s DOJ just like we will see Trump’s Tax Returns and the un-redacted Mueller Report. (Or learn why his father Donald hired Epstein at Dalton w/o a college degree)

In a statement issued Saturday after the news that Epstein was dead, AG Barr said the death of the disgraced financier and sexual predator “raises serious questions.”

“I was appalled to learn that Jeffrey Epstein was found dead early this morning from an apparent suicide while in federal custody. Mr. Epstein’s death raises serious questions that must be answered. In addition to the FBI’s investigation, I have consulted with the Inspector General who is opening an investigation into the circumstances of Mr. Epstein’s death.”

Monday afternoon, the Times reported that one of the people guarding Epstein was not a “full-fledged” corrections officer and that neither that person or the other guard had checked on the inmate for several hours when he was found hanged. Barr told the paper he’d been told about “serious irregularities” at the Metropolitan Correctional Center in Lower Manhattan “that are deeply concerning and demand a thorough investigation.” he said the the Department of Justice “will get to the bottom of what happened. There will be accountability.

5. Donald Barr May Not Have Cared About Credentials When he Hired Epstein, But Questions Are Being Asked Now That His Son is Investigating Epstein’s Death

I don’t even have a theory to fill out a conspiracy theory with, but it’s wild that Bill Barr’s dad hired young college dropout Jeffrey Epstein to be a high school calculus teacher.

“I don’t even have a theory to fill out a conspiracy theory with, but it’s wild that Bill Barr’s dad hired young college dropout Jeffrey Epstein to be a high school calculus teacher.”

Trump’s lawyer AG Bill Barr wants to bring to justice anyone complicit with Jeffrey Epstein. I guess that means his father who first introduced Epstein to young girls when he hired him at the Dalton School when he didn’t have a degree

“Trump’s lawyer AG Bill Barr wants to bring to justice anyone complicit with Jeffrey Epstein. I guess that means his father who first introduced Epstein to young girls when he hired him at the Dalton School when he didn’t have a degree.”